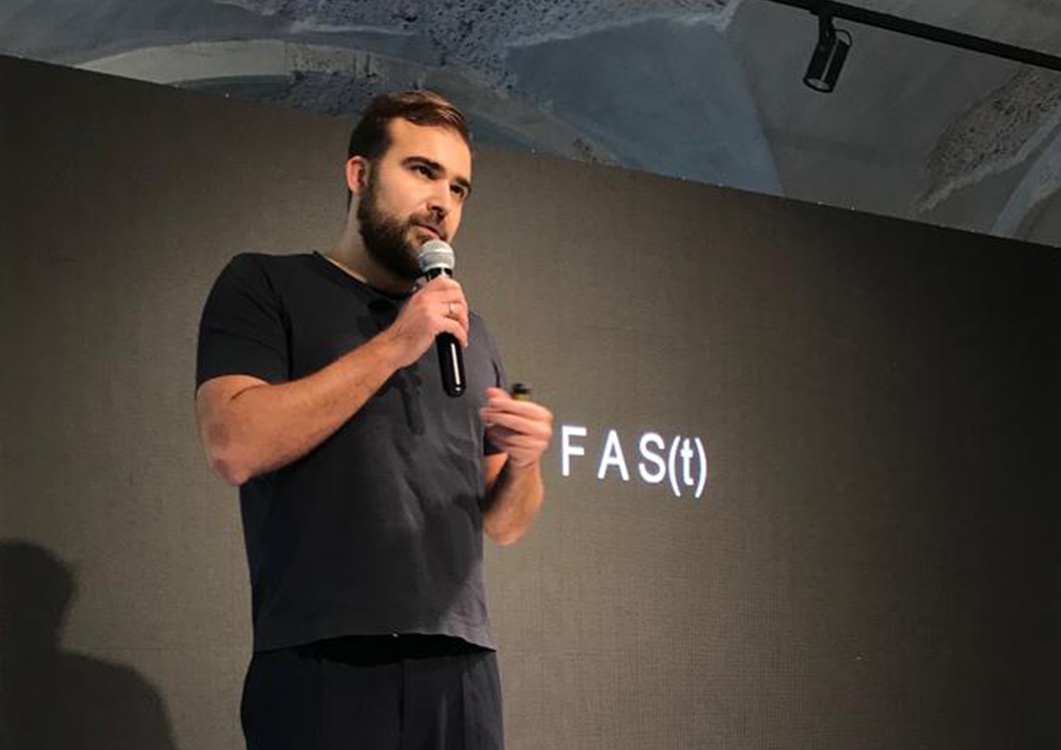 Type – Public speaking
Location – Moscow, Russia
Date – 04.10.2019
October 4 in the space "Ruin" of the Shchusev State Museum of Architecture FAS(t) took a part of the festival "Open City". Co-founder and partner Alexander Ryabsky presented the architectural studio FAS(t) manifesto with telling about the fundamentals of it's practice. "We (Ksenia Kharitonova and Alexander Riabskiy) founded our architectural studio FAS(t) in 2011. Our first project was a small country house; we also designed and installed exhibitions for the Shchusev State Museum of Architecture. The studio’s team was built up over time. We have completed a number of different projects both in Russia and abroad. But we are not going to talk about them today. It is not often that we get the opportunity to take part in public events, especially like the one at hand, where we are going to speak about our architectural studio over a period of time—our first such experience. This is why we have decided to share what we consider to be most important to us. Architecture, or the art of construction, is, in its primary meaning, one of the most ancient pursuits. Despite striving to create something “new,” architecture is impossible without regard for what came before. We cannot ignore or fail to take into account what has been done before us. Architecture is impossible without a master and an apprentice, and therefore, without knowledge that can be taught and passed on. The pursuit of this very knowledge, a universal remedy, as well as essential forms and meanings of architecture has been relevant in all ages. This world of ideas and philosophical concepts, accumulated over many centuries, is incredibly diverse. One has to immerse oneself in this world, which is a fascinating process that can inspire one to creative impulses and provide various development paths. We thought it was important to lay out our understanding of what lies at the foundation of this world, what makes up its core. We would like to state the fundamental architectural concepts that form the basis of our work. Geometry Geometry is an abstract way of conceptualizing space. It helps us understand and describe it. The concept of geometric space lies at the core of architectural space, which we understand to be the second rational nature. It is through geometry, rooted in the field of measurements, that we learn about the natural world and, through its application, create our own artificial, architectural one. Proportion As we use geometry to imagine architectural space, we face the question of defining the dimensions of the elements that comprise it, their proportion to each other and the whole. We are talking not about concrete values in meters or inches, characterizing the length, width, and height, but about the rule of proportions, according to which, for example, the width determines the length and both of these values determine the height. Structure If proportion is a universal rule, we understand architectural space as a structure built according to some rules of proportions. The way we see it, the notion of structure is primarily linked to spatial organization as opposed to constructional elements. Inventing a unique structure is a key moment for us. Metaphorically speaking, we see it as the creation of a volumetric-spatial, geometric frame. Scale Needless to say, scale depends on proportion and structure. But we think of it not as an exclusively rational category that has to do with, for instance, being proportional to people or being ergonomic, but as something irrational and subjective. We view scale as something that should be understood in a much broader, magical sense, when that what is small can become large, the weak can turn strong, and the heavy made light. It is a tool that we use to shape the individual character of the architectural space. Tectonics We understand tectonics as the “natural workings” of materials. One cannot commit violence against materials. The “natural workings” of materials, which determine their capabilities, derive from the natural laws of nature–powers we cannot see. Tectonics allows us to represent that, to make the invisible visible. It is the marker of our human civilization. Detail Details emerge as a result of thoughtful and well-considered work with materials. It is often a matter of how one material joins another. It is always a matter of border, junction, connection, intersection, penetration or a touch. A detail cannot exist on its own and is always an organic continuation of the whole. It shouldn't contradict the naturalness of the building process, but demonstrate it's aesthetic reinterpretation. The Spirit of the Place We think that the spirit of a place lies on the boundary between the cultural-historical context of the place and our subjective emotional experiences. We are talking not about the formal effect of a natural landscape or urban realm, but about knowing the stories accumulated in places and objects, and about the personal emotional reaction to them. The creation of architectural space, in our opinion, always entails at attempt to reflect the Spirit of a place. * * *. These categories are timeless, which is why they are always relevant, existing beyond the borders of any one style. It is they that make up the essence or even the quintessence of architecture. We see them not as some sort of restrictions or dogma, but as a universal set of tools that gives us an abundance of opportunities. It is these tools that are the architect’s valid and powerful arguments, the foundation on which we build our work and without which the practice of architecture is meaningless." ___ www.opencityfest.ru