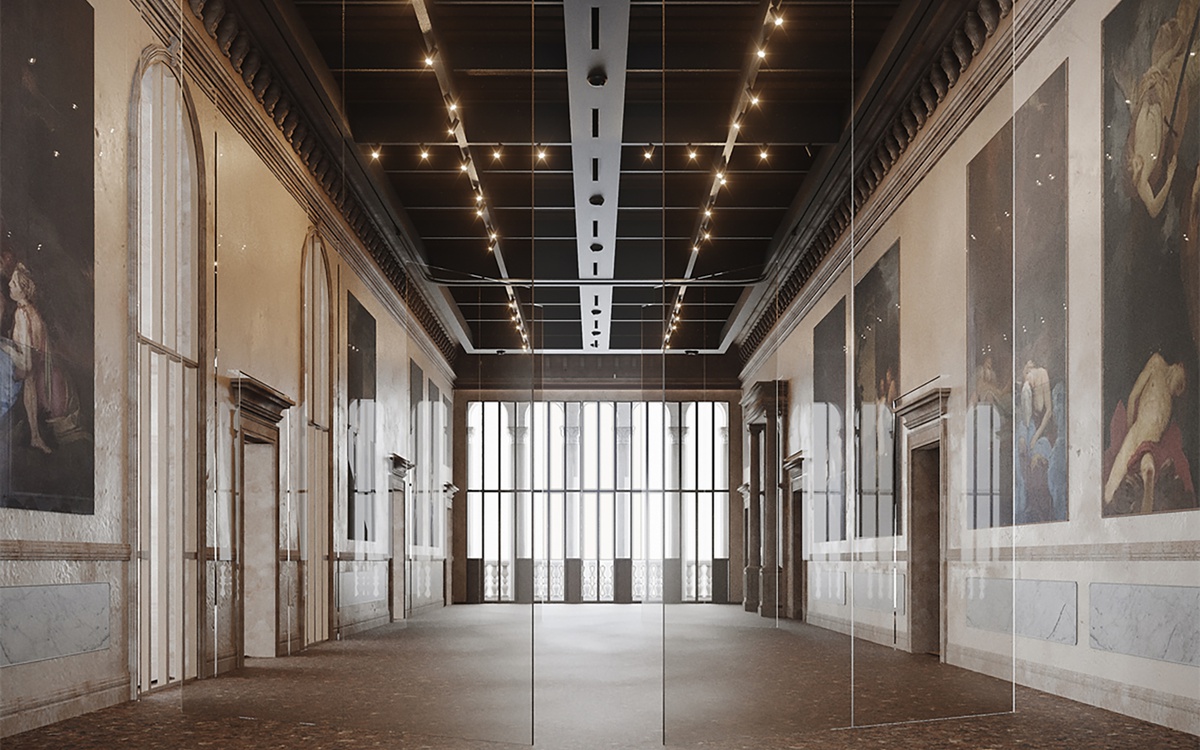 Type – Redevelopment
Location – Venice, Italy
Year – 2017
The Palazzo Ca' Tron is located on the Grand Canal in Venice and owned by the University of Venice (IUAV).
Like many other Venetian palaces, Ca’ Tron boasts a rich architectural history. Erected in 1488, the palace underwent reconstructions in the 1570s, 1650s, and 1970s. Work was carried out by such renowned architects as Baldassare Longhena and Carlo Scarpa.
The project’s main aim is to create a unique approach to the reconstruction of such a building.
The Palazzo Ca' Tron holds significant historical value, but at the same time there is a need to adapt it for use as a space for the university’s faculty and students.
It was necessary to transform the palace from an untouchable museum exhibit to a livable space meant not only for classes and lectures, but also public events–exhibitions, open lectures and presentations–in a way that would not strip it of its unique historical merit.
A careful examination of the socio-historical context, analysis of the spatial and functional structure, the existing building's structural peculiarities, and consumers’ needs were the points of departure for the reconstruction project, which can be divided into three main parts.

Open Doors. City Ground Floor
The problem with the palace’s closed nature lies in the fact that in spite of its location on the Grand Canal, it does not utilize the traditional main entrance from the canal. The arched entrance designed by Longhena, connecting the palace to the street network, is also closed, and the only functioning entrance is lost in a labyrinth of narrow streets. There is another secondary entrance, a small portal from the Rio di Ca’ Tron canal, which is also virtually hidden from view and is no longer in use. Because of that, the space of the ground floor and the picturesque, spacious garden is enclosed. Our project involves not only opening up the doors, but also accentuating and drawing attention to some of the entrances. Thus, the wooden doors of the main entrance from the Grand Canal would always remain open, beyond which one could see a stained-glass window and a pier, made of anti-slip glass, leading to the Grand Canal, which is to be used by boats and water taxis. The pier is accentuated by two illuminated bricole poles. In order to open up the garden to the city, the blank wall separating the garden from the Rio di Ca’ Tron canal would be removed and a quay added. Inside the building, the entire first floor would be equipped for public events.

Migration of Functions
Apart from the enclosedness, there is also a conflict in the existing allocation of functions and the spatial structure of the palace. The project seeks to uncover the authentic spatial framework of the building. By analyzing the potential of the palace’s rooms and structural features, we have redefined its functional zoning. In changing the functional use of the space, we have attempted to utilize, as much as possible, the historically specific architectural anatomy of the Venetian palazzo, all the while taking into account its contemporary needs. In other words, we consider the migration of functions within the building as essential to preserving the integrity of the original structure's design.
Each floor is dominated by the expanse of a long hall, or portego, which looks on to the Grand Canal on one side, and the interior courtyard and garden on the other.
On the ground floor, this hall would be transformed into an exhibition sottoportego, flanked by adjacent rooms that would be used for public exhibitions and a bookshop. A new entrance would be created to access a little garden pavillion, functioning as a bar and chamber hall.
The main staircase, linking the ground floor with the first floor, can also be used to access the intermediate mezzanine floor, where we propose to create living quarters for visiting faculty and guests of the university.
The spacious hall on the first floor–the ceremonial portego–would be dedicated to internal university events, as well as employed on ceremonial and festive occasions. The rooms around the perimeter of the hall would be reserved for use by the department’s administration and faculty. The first floor mezzanine, already linked to it by existing staircases, would also be designated for administrative offices.
The second floor houses lecture halls; the central hall is a theatre-like portego, ideal for use as a stage for lectures, presentations, film screenings, and student events.
The second floor mezzanine is reserved for storing the students’ academic materials and tools.
The third floor also features a central hall with a translucent roof and a mezzanine accessible by two spiral staircases. The hall becomes one great workshop or studio for students to work at. Around the perimeter of the hall, there are partitioned spaces for storing mock-up materials and hosting small, topic-specific workshops. There is access to the roof and its terraces, or altanas.

Ten Interventions
We have worked on “clearing out” the interior space. It was important for us to identify the elements of historical heritage value and to rid the building of its recent additions that had appeared due to practical considerations. At the same time, we had to discover new places for new implementations–or interventions–consisting of architectural and engineering solutions that would conceal the necessary utilities and help to overcome the challenge of adapting this or that part of the building to contemporary needs.
The interventions provided by the project can be classified as exterior and interior. The exterior ones include a new quay for the main entrance from the Grand Canal, a dock with steps on the the Rio di Ca’ Tron canal, a garden pavilion, roof-terraces, and a flood protection system of drainage structures and automatic tidal barriers.
The interventions inside the palace are mostly focused on the hall space of every floor. They act as technical “platforms,” which consist of systems providing heating, air conditioning, ventilation, artificial lighting, as well as systems of spatial transformation. In certain cases, these platforms act as strengthening structural elements.
For the most part, the interventions take the form of structural ceiling grids in, for instance, the sottoportego on the ground floor and portego on the first floor.
The the first floor portego can take the shape of a translucent suite of rooms or glass anfilade, as the ceiling “platform” features glass partitions that can be used to divide the hall into three areas; these partitions become opaque when fully extended.
The second floor portego contains both ceiling and floor platforms. The latter can be transformed into a little, amphitheatre-like structure which, if need be, can be concealed with the help of a sliding curtain track, fastened to the ceiling platform, which also has an in-built roll-down video screen and acoustic system.
The third floor portego contains a mezzanine platform concealing the utilities and the roof lattice beams, which support the glass roof. Two spiral staircases lead to the roof mezzanine, which in turns leads to the open-roof terraces on top of the palace. The interventions include an additional lift and an emergency staircase. All the new elements are made from prefabricated metallic parts coated with pre-weathered zinc. When the reconstruction takes place, the amount of “wet” work will be minimal.
The clarity of the concept, well-thought out engineering and structural systems, and the project’s overall approach illustrate a clear connection between history, the local architectural and building traditions and innovation. The reconstruction projects offers not only a concrete solution for the Palazzo Ca' Tron, but also a method and project strategy applicable to other buildings in Venice, as it an open system. 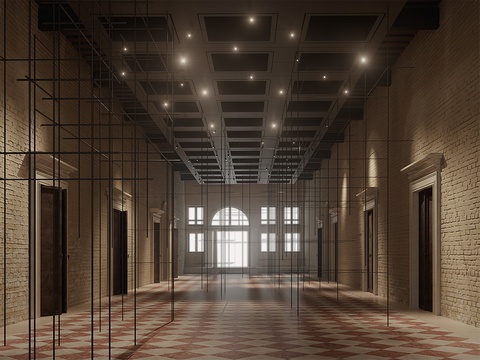 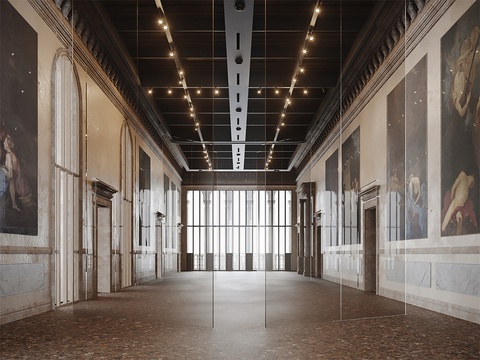 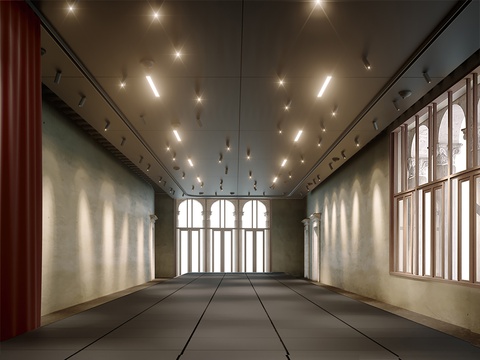 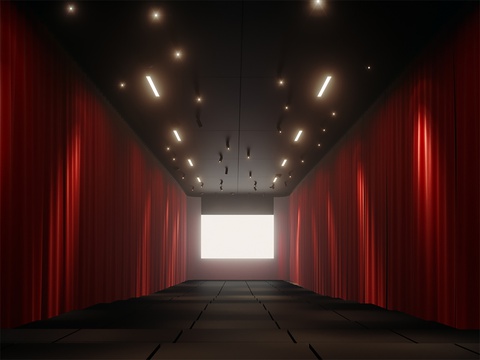 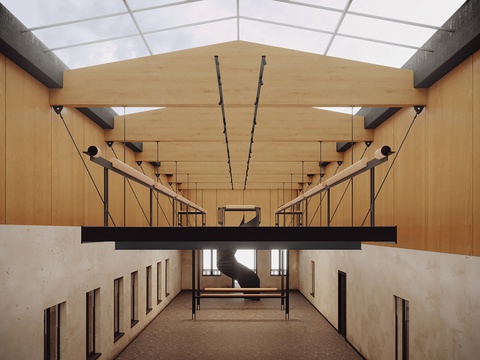 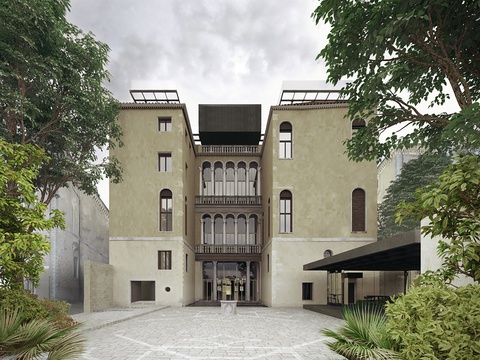 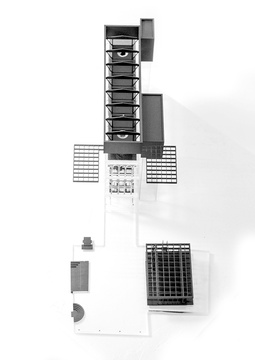 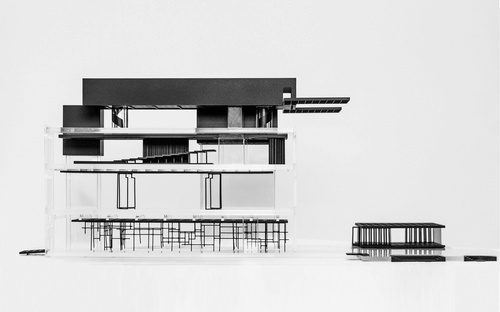 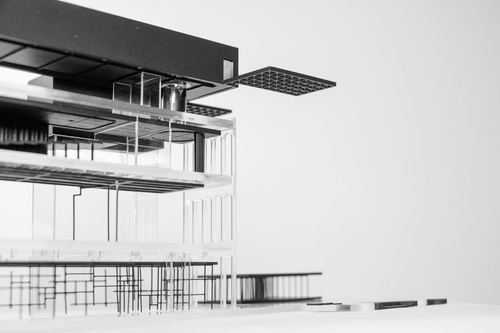